Attleboro Community Theatre, home of award winning theatre since 1957 was nominated for 10 Motif Theatre Awards in the Community Theatre category this year.  The Awards Ceremony was held at Fete Music Hall on Sunday evening, August 7th.  ACT became the lucky recipients of six Motif Awards that evening.  With this being only the second year attending and being nominated in this category, ACT showed precedence as a theatre company amongst their peers.  President, Jeanne Smith stated that she is “honored to be recognized for our hard work and dedication to the arts, and we couldn’t have done it without the support of our talented actors, tech crews and most of all patrons who support us for every show!”

Those receiving special recognition were:

ACT is beyond proud, excited, and pleased to be recognized by such talented individuals in the Rhode Island area. They are especially proud of 10-year-old, Emma Yutz for taking home the Best Leading Actress Award and going up against experienced and inspiring talent. Emma, who was 9 at the time of the production, immersed herself in the role of Virginia and won the hearts of many.

ACT’s production of “Glengarry Glen Ross” also shined on Sunday by receiving 4 awards. ACT knew that this non-traditional play would be a risk, and the risk was taken on well by Mario J. Carnerio who made his directing debut in Fall 2015 with this production.

ACT will present its 60th season this year consisting of the following productions:

“One Flew Over the Cuckoo’s Nest” (Dir. David Blessinger)

“Vanya and Sonia and Masha and Spike” (Dir. Jim Sulanowski)

Online tickets and reservations can be made by visiting the ACT website at www.attleborocommunittheatre.com. 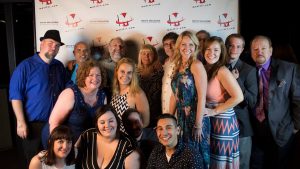