June 18 and June 19th: Auditions for “Inherit the Wind” 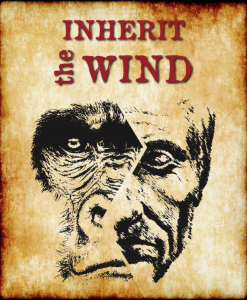 Attleboro Community Theatre is pleased to announce open auditions for the opening show of ACT’s 62nd season. “Inherit the Wind” will be directed by Kelli Tallman and auditions will take place on June 19th and 20th from 7pm-9pm at Attleboro Community theatre; located in the basement of the Ezekiel Bates Lodge in downtown Attleboro.

Please prepare a one minute monologue to showcase the actor. Auditions will also consist of cold readings from the script. Attending both nights is not required, but highly recommended. The director has also suggested reading the script previously to be fully prepared.

“ITW takes place in 1925 in a small, bible-belt town in Tennessee. The audience finds out that the science teacher has been arrested for teaching Darwin’s Theory of Evolution-which at the time, was against the law. A famous progressive lawyer from the North, Henry Drummond, travels to Tennessee to defend the science teacher. A fundamentalist politician, Matthew Brady, prosecutes. This is a very thinly disguised rendition of the 1925 “Scopes Monkey Trial” with debates between Clarence Darrow and William Jennings Bryan taken largely from the transcripts. A classic debate between fundamentalism vs. the freedom of thought, church vs. state, creationism vs. evolutionism. Drummond believes that when people aren’t given the knowledge and the chance to ask questions – thinking is limited. Drummond argues that everyone has the right to think and ask questions- why else would God give us a brain and the ability to think? Brady believes that the only true written word, is the word of God. He believes that he is on the ‘right’ side and is defending the “Living Truth of the Scriptures.” It’s a stunning, passionate, edge of your seat debate between two old friends who couldn’t be further apart.”

*All actors must be able to perform in all 9 shows and be available for Tech week leading to opening night.